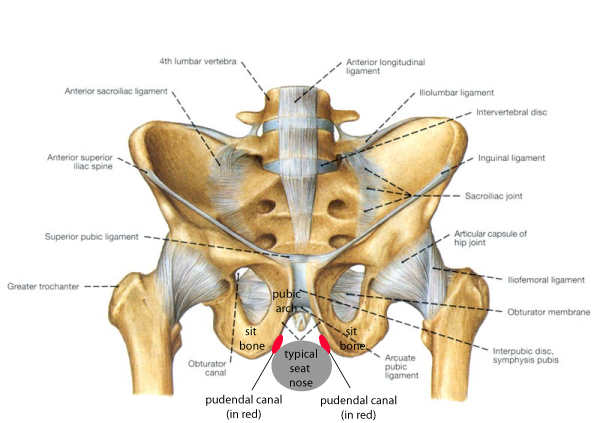 Most people believe the problem with bike seats is that they cause high pressure in the soft tissues at the center of the perineal area and on the prostate. This is intuitive, but apparently quite wrong. In fact, the critical nerves and blood vessels get from inside your pelvis to outside your pelvis via the pudendal canal, which is right up against the underside of your pubic arch. The location of the pudendal canal is shown in red on the attached illustration (adapted from http://www.tipna.org). Unfortunately the pudendal canal is exactly where the sides of the wider part of the nose of a conventional bicycle saddle apply pressure in a cyclist leaned over the handlebars. Indeed, a cut out in the middle of the saddle only increases this pressure. The soft tissue at the center is not what you should be worried about. It's the nerves and arteries squished between the sides of the nose of the saddle and the bony underside of the pubic arch. There's really only one way to avoid that pressure: use a nose-less saddle, a no-nose seat.

Your cart is empty.